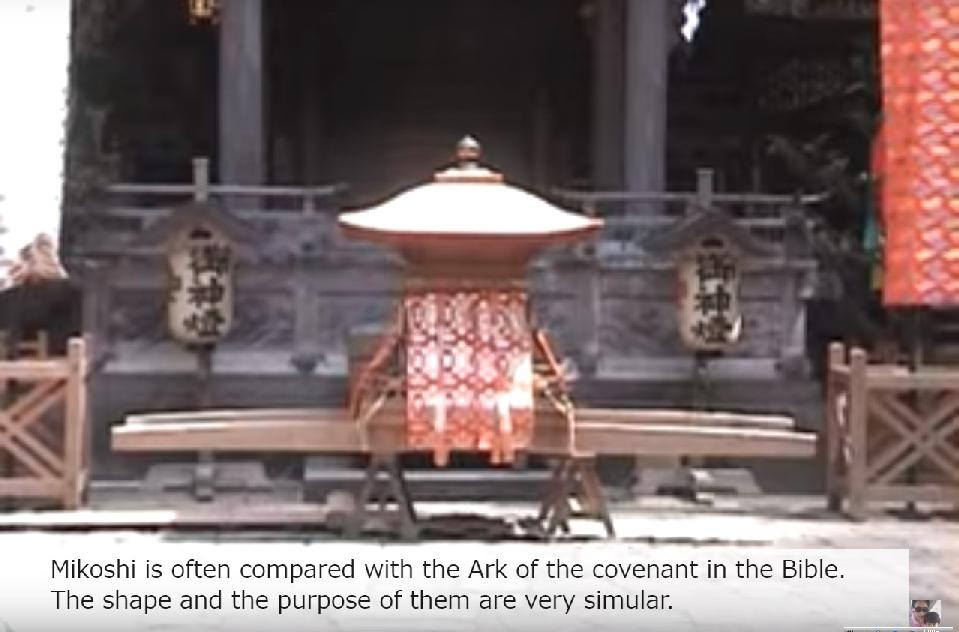 You might see that the Japanese Mikoshi that they were carrying on the video is the same as the ark of the covenant in the Bible.
Actually a mikoshi is also the movable shrine that the spirit of god is resting in it.
An Israeli people would be interested in Suwa Taisha shrine after he/she knew that is it on the foot of Moriya mountain since it sounds like mount Moriah in Jerusalem.
Actually the Moriya mountain is devine one since it is to be believed as the body of the god.

I would like to search for the Ten Lost Tribes issue especially with Israeli/Jewish people. I will be always waiting for the contact from you.
I will show you there are some amazing coincidences between the custom of Suwa Taisha and ancient Israel.

There are 4 shrines in Suwa Taisha and two of them are located on the foot of Mount Moriya.
It seems that many Israeli people reminds Mount Moriah when they hear the name of the mountain in Suwa.
The king Solomon built the temple in Mt.Moriah in Jerusalem.

In the old rule of the Ontohsai festival, heads of 75 deers had been dedicated to God.
In the Samarian Passover festival, 75 heads of lambs had been sacrificed and dedicated, though recently it was changed to 45 heads of lambs.
Why deers? Since we did not have sheeps in Japan in ancient times, even now.

Held time of the festival

Once the Ontohsai festival had been held on a Chinese lunar Year of the Rooster Day in Marchin in Japanese old lunar calender. It is around mid-April in current Japanese calender.
Over-over(Pesach) is held on the Jewish calendar NISAN (January) 15 to 21, that is in March and April in our current calender.

There is a building called "JIKKENRO" in Kamisha Maemiya shrine of Suwa Taisha where the main celemony is held in the ONTOHSAI festival. It is compared with Tabernacle, the movable temple in ancient Israel.
JIKKENRO means that the length of the building is about 18 meters(jukken).
The Sanctum of the Tabernacle was build with a length of 30 cubits(about 13 meters), width of 10 cubits(about 4 meters)
The survey of JIKKENRO is similar to the Tabernacle.

Both have the roof but without walls and the skeleton of a building, and there are pillars arranged at regular intervals.
You can see the photo of the 1/20 model of Tabernacle on the following web site(language is only Japanese)
http://bible.co.jp/tabernacle/
You can see an old drawing of JIKKENRO on the following page.
http://www.city.suwa.nagano.jp/scm/siryou/siryou_yurakubyoubu/L/Image10L.htm

In the ONTOHSAI festival, the Mikoshi is placed inside the JIKKENRO building.
In Tabernacle the Ark of the Covenant was placed in the inner sanctum of it.

Both of JIKKENRO and Tabernacle is long and placed in Eastern-Western direction and the entrance is in the east end.
In Tabernacle Ark of the Covenant is placed in west side where inner sanctum is, but the reverse is JIKKENRO where the east side of it the Mikoshi is placed.

Login to quote this blog

You cannot quote because this article is private.